The Humanities and Climate Change

'Summer on the Greenland coast circa year 1000'

Historical human adaption to environmental change in the North Atlantic: an exemplar of humanities contributions to the climate change debate

In 985, the Icelandic outlaw Erik the Red departed westward with his followers to settle the western periphery of the known world. A restless but enterprising individual in need of a new home but with few viable options remaining, he made the decision to establish himself where he was unlikely to encounter many of his earlier social troubles. His risk paid off and it is often claimed that naming the land Greenland because ‘people would be attracted there if it had a favourable name’, as stated in Eirik the Red’s Saga, was a misleading advertising ploy. [1] However, Eleanor R. Barraclough among others have discredited this thesis by noting that, while indeed Greenland’s winter climate was extremely challenging to endure, temperatures in summer could reach levels of balmy comfort, very appealing to the Norse arable and hunting modes of life. [2] However, as the Medieval Warm Period came to an end around 1250 and the climate cooled towards the Little Ice Age, which began circa 1300, even the most optimistic hopes for a sustainable European lifestyle in Greenland grew bleak. Encroaching sea ice cut off trade routes with Iceland and Norway and made ocean-based hunting increasingly dangerous, leading the thirteenth-century writer of Konungs Skuggsjá (The King’s Mirror) to marvel at the type of person who would take such risks. [3]  Without these links, the Greenland settlements’ dependency on imported goods vital to their way of life, and which they didn’t have domestic means to sufficiently produce, went unfulfilled. In turn, this shortage, added to the many dangers of such peripheral life and the journeys required, decimated the numbers willing to take the risk of going there, worsening the existing problem of an unsustainable population. [4] Ultimately these and other factors like increasing Norwegian political centralisation and economic regulation, the negative impacts of which were increasingly worsened by climate and subsequent environmental changes, combined to make the survival of the Norse Greenland settlements untenable.

The humanities are presently integrating themselves into subjects and debates previously thought by many to be beyond their horizon at a faster rate and with broader support than ever before. This progression has not been straightforward, although its challenges and opponents have been met by solid arguments against disciplinary isolationism. In 2014, Poul Holm wrote about the need for a new kind of thinking that he termed ‘Anthropocene Humanities, to overcome the differences [between the perspectives of various people and nations on climate change] and create a new consensus for living with environmental change’. [5] He made the case that recognising the validity of humanities findings is important ‘because this enables us not only to criticize the world but to help create a better one’. [6] With this in mind, the great potential of the humanities should be applied to myriad modern issues and utilised to enable the better-informed creation of related institutional and governmental policy. 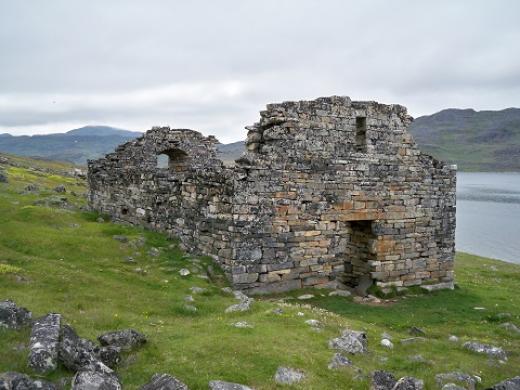 So, how do humanities insights into the impacts of a cooling climate, such as in the historic Greenland example presented above, help us with our present-day warming?  In short, they document and analyse the human cost. This human cost includes everything from the toll in real lives at the extreme, with real personal stories told, to the severity of human displacement caused by ostensibly minor change in relation to how severe such change has the potential to be. For example, analysis of historical documentary evidence in the Icelandic Annals demonstrate how the impacts of the changing climate on trade routes led to Norse Greenlanders taking greater risks to access lumber required for ship and building maintenance and construction. The gap in references to Norse excursions to present-day Newfoundland and the densely forested Labrador coast of eastern Canada, known to the Norse as Vinland and Markland respectively, strongly infer that they stopped occurring; a supposition reinforced by the fact that such a trip to Markland was deemed noteworthy in the Icelandic Annals for 1347. [7] Such an excursion would have taken the Norse at least most of a year and, with the expanded ice coverage, would have been treacherous. The fact that they were willing to go to such lengths demonstrates how things taken for granted can quickly become almost inaccessible and represents how the humanities provide warnings of the need for broad preparation and contingency planning on our part. While modern technology negates many risks to life from present-day climate change, the warming presents many different types of risks, but the costs by different means could be largely the same and on a far greater scale due to our higher populations and denser settlements. Most importantly, the humanities have the capacity to convey these types of knowledge in a way that can hit home more directly to a wider range of people than possible through more quantitative approaches. To be clear, it is not at all my intention to undermine them, instead it is to champion their importance in combination with the qualitative approaches of the humanities. Qualifying our concerns and fears by showing how real individual people have been affected by past climate change, rather than only commenting on potential theoretical future scenarios in isolation, could be a tipping factor that could spur many more people into action.

In policy terms, qualitative interpretations of scientific data and analysis could help governments to counter arguments about scientific uncertainties. With climate change, almost nothing is entirely certain and enacting widespread combative policies is disruptive to the comfort of the status quo and its likely expense is daunting. Therefore, it may be easier to convince opponents of the worthwhileness of the expense by using the full range of personified humanities perspectives to demonstrate the real impacts of even minor climate change in parts of the mind that quantitative data often fail to reach, and it could supply politicians with a fuller basis to justify proactive decisions to their constituents.

Thankfully, we operate at a time where more widespread appreciation of the humanities is growing, but there is still a lot of work to do. Those of us who have the opportunities and resources to engage people with the plethora of pressing issues on which the humanities can inform debate and help to drive positive action are in a position of responsibility to share our points of view wherever they may be useful. We must use the existing momentum of interdisciplinarity to present a much more rounded sphere of knowledge and embrace the idea that our disciplinary work falls short of its full potential if taken alone. Regarding climate change, we stand on the precipice of a new Earth, a new home, for which we are unprepared. Let’s add the messages and lessons that we can learn from to our growing knowledge, recorded by those who, also unprepared in their time, faced the nearest thing to such dramatic change and discover how it can help us.

Jonathan Mehaffey is a PhD student at the Trinity Centre for Environmental Humanities. His research focuses on human adaption to environmental change in the North-Eastern Atlantic between 1100 - 1500 A.D., primarily using evidence found in documentary sources and cross-examining with ecological and archaeological data