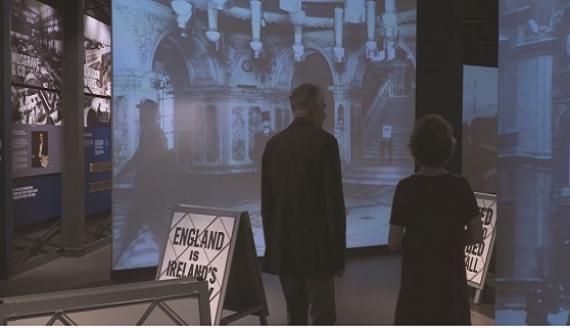 The history of Belfast is often seen, over-simplistically, as one of sectarian conflict and deep division. Dr Olwen Purdue’s work has challenged this perception and changed the way people think about Belfast and its past, engaging local and international audiences in an alternative, more nuanced, social history of a remarkable city at the height of its industrial might, and of the shared experience of those who lived and worked in it.

With research spanning twelve years, Dr Purdue has shed an important new light on the social history of nineteenth and early twentieth-century Belfast and its rural hinterland, providing the first detailed examination of issues such as poverty, welfare, power and agency generally overlooked in historical accounts of the region.

Her work has informed the interpretation of Belfast’s history by major cultural and heritage institutions. It has also reached millions of people in Northern Ireland, Great Britain and globally through television, museum exhibitions, internationally-acclaimed visitor experiences and a community engagement project.

Check out 'A Tale of Two Cities-Poverty and welfare in Belfast past and present' on vimeo.

From 2008, Dr Purdue worked on the Economic and Social Research Council-funded project, ‘Welfare Regimes under the Irish Poor Law 1850-1921’, in which she developed new research into poverty and welfare in the north of Ireland. This provided the first scholarly exploration of the ways in which the poor of nineteenth-century Ulster engaged with welfare provision in the form of the workhouse. (1)

Her developing body of work and expertise in the social history of Belfast and its hinterland led to a research commission from two companies (CHL Consulting and Event Communications) which were contracted by Titanic Foundation and Belfast City Council to develop the content of the highly-acclaimed visitor experience, Titanic Belfast. Dr Purdue was commissioned as academic and historical adviser, her research and expertise shaping the content of the attraction’s opening gallery - Boomtown Belfast - which highlights working conditions in Edwardian Belfast and outlines the social and economic context within which the Titanic was built. While working on this commission, Dr Purdue drew on themes she was identifying to edit the collection of essays on the social history of the growing city, Belfast: the emerging city 1850-1914. (2)

This work also led to a major Arts and Humanities Research Council-funded project (with Professor Peter Gray from Queen’s University Belfast), ‘Welfare and Public Health in Belfast and its Hinterland 1800-1972’. Dr Purdue’s work focused on the period 1850-1939 and provided the first in-depth exploration of the challenges of poverty and engagement with welfare systems experienced by many of Belfast’s labouring classes, particularly women and children. Sole-authored outputs from this project included an article in Urban History and an invited chapter in a volume on welfare regimes in Europe (3 & 4). Her work on this led to a further commission in 2013 to provide expert historical research and advice for the Ulster Museum, part of National Museums NI where she provided advice on the content of a new permanent gallery on the history of nineteenth-century Belfast, Industrial Giant and the Shadow of Poverty, and wrote and presented an audio-visual installation which explained this aspect of Belfast’s history. In 2017 she also produced an online documentary on poverty and welfare in the city from both historic and contemporary perspectives – Belfast, a tale of two cities. (5)

These themes were further developed and explored within a wider geographical context and theoretical framework in Dr Purdue’s 2018 edited collection, Urban spaces in nineteenth-century Ireland, in which her own chapter explored the ways in which Belfast’s poor navigated and challenged the constraints of welfare provision in their use of the city’s workhouse. (5)

Dr Purdue’s work has shed new light on how the poor of the nineteenth and twentieth-century Belfast, particularly women and their families, experienced working life in the city and faced the challenges of poverty and ill-health, how they engaged with and experienced welfare provision, and how they exercised agency in using the limited welfare options open to them.

Dr Purdue has worked with a range of partners to develop new, high-impact ways of disseminating her research on the social history of industrial Belfast, challenging the all-too-common narratives of sectarian conflict and encouraging a deeper engagement with and understanding of Belfast’s rich social history.

Public and community awareness and understanding

Through her work with Titanic Belfast, the Ulster Museum, and TV documentaries, Dr Purdue’s research has reached millions of people locally and globally.

As academic and historical advisor for Titanic Belfast, she worked with the designers on all aspects of the attraction and was responsible for developing and signing off on all historical content. However, her distinct knowledge and expertise were particularly employed in shaping the content of Gallery One - Boomtown Belfast - which introduces the visitor to life in early twentieth-century Belfast and outlines the social and economic context in which RMS Titanic was built.

The visitor attraction, which opened in March 2012, has had more than 5.7 million visitors (August 2019); 95% of respondents were tourists, with the vast majority of these (80%) from overseas. As each visitor follows a pre-set route, commencing with Dr Purdue’s Boomtown Belfast gallery, every visitor experiences this gallery.

In October 2013, Dr Purdue provided academic advice to the Ulster Museum, working with them on the development of an entirely new permanent gallery and audio-visual installation on the social and economic history of Belfast – Industrial Giant and the Shadow of Poverty – which used the museum’s collections to explain the industrial growth of Belfast and to engage audiences in exploring the social conditions of the time.

The Ulster Museum attracts hundreds of thousands of visitors annually (623,272 in 2018-19) with 30% of visitors coming from outside Northern Ireland, of which half are international.

It is, however, through the expert advice based on her original research that Dr Purdue has provided for TV documentaries that her research has reached the masses with a combined audience of several million. These include: Britain’s Hidden Heritage (BBC1, 2015) (approx. 4.25 million viewers); Britain’s Most Historic Towns (Channel 4, 2018) (more than 1.5 million viewers), BBCNI’s Belfast: mud sweat and 400 years (2015 and repeated twice), and BBCNI’s 3-part series Family Footsteps (2018).

In 2018, Dr Purdue’s work reached millions of viewers through her commission as credited historic expert and interviewee for the Channel 4 documentary, Belfast, Britain’s most Victorian City (2018). Each episode reached an average of 1.5 million viewers on its first airing, placing the series at Channel 4’s third highest-viewed in that prime-time slot over the past three years. The series has since been repeated in the UK and distributed worldwide.

Dr Purdue also sought to engage local hard-to-reach audiences, mainly young people, in the history of their city through the project Our Stories, 1932. Dr Purdue drew on her research into the city’s social history to work with Greenshoot Productions in developing a series of research workshops and activities for young people from north and east Belfast in which they researched work, life and poverty in their area during the 1930s. The groups then presented their findings to an audience which included two playwrights – Martin Lynch and Gary Mitchell - who incorporated this material into a stage play, 1932: The People of Gallagher Street. The play ran in The MAC Theatre in Belfast from 2-13 November 2017 (total audience: 2,253), helping to raise public awareness of social conditions in early twentieth-century Belfast. To accompany the play, Dr Purdue worked with Greenshoot Productions to organise and participate in a series of public lectures in Belfast’s Linen Hall Library.

Witness to History: the story of the 1641 depositions

Remembering and Commemorating the Irish Famine