By late August the swallows are twittering ominously but in the academy no one is thinking of flying south. Particularly colleagues with publication deadlines. August truly is a wicked month, as projects, often long fingered due to marking, viva duty and post-graduate supervision, jostle noisily for attention. These days my top priority is getting volume LXXI of Archivium Hibernicum  to press, on time for its traditional September publication deadline. I’ve been editor of the journal since 2000 and, along with a dedicated editorial board, an army of academic referees and a host of talented contributors have brought over a million words’ worth of historical sources and commentary to the national and international academies. Archivium Hibernicum is one of the oldest history journals in the country, first appearing in 1912, and, from the outset, has been dedicated to the dissemination of historical documentation, in the original languages, in accurate and rigorously annotated versions. The forthcoming number has a strong focus on Italian material, including a historiographical piece on the Irish in Rome (Matteo Binasco, Università di Siena), a selection of inquisitorial documents on Terence McSweeney’s 1921 hunger strike (Antonio Belletti, Scuola Vaticano di Paleografica) and a study of early modern religious orders in 16th century Italy (Querciolo Mazzonis, Università di Teramo). Irish contributions include 17th century municipal documentation from Clonmel, edited by Bríd McGrath (TCD), and an article on 18th century, Dublin-based educationalists by Wade Mahon of the University of Wisconsin. Ekain Cagigal’s (Bilbao) piece on the Irish in the Basque country marks her inaugural contribution to Archivium.

Material for a typical issue usually arrives on my desk in the twelve months prior to publication and is immediately sent out to obliging colleagues for refereeing. They give freely of their expertise, returning reports that are then communicated to authors. If publication is recommended, authors are invited to make the inevitable changes that peer review involves. By this time of the year all copy for the current issue is safely on my desk, normally at an advanced stage of preparation. Some late copy almost inevitably arrives, as if intended to scupper deadlines. This year, the death of an esteemed contributor and board member, Hugh Fenning OP, necessitated the preparation, as custom dictates, of an obituary for inclusion in the forthcoming issue. As many will know, Dr Fenning was author of one of the finest books on 18th century religious history, his famous The Undoing of the Friars of Ireland (Louvain, 1972) and a slew of scholarly articles. Now that the obituary has been completed, we can move towards publication. For the past weeks, I’ve been in constant communication with our typesetter, our printers have been put on notice and the Humanities Institute office is preparing invoices and postage. It’s all a bit of a whirl. 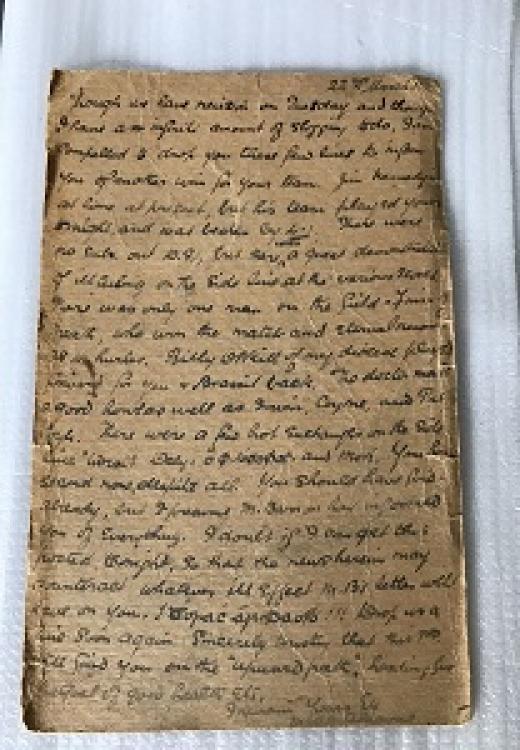 An account of an early twentieth century hurling match in Maynooth College. Courtesy of Prof. O'Connor.

If only this were the sole work in hand! I’ve also an October deadline for the submission of an article, originally a conference presentation, entitled ‘La réception de la Geschichte der Päpste de Ludwig Pastor dans le monde anglophone’. This was delivered last February to a seminar hosted by the Görres Gesellschaft and the Ecole Française de Rome. Foreign language pieces always demand extra work, not least due to varying editorial conventions and variations in house style. For this one, I’m grateful for the professionalism of colleagues like Prof Andreas Sohn, the esteemed Sorbonne medievalist, who is editing the conference proceedings. At the same time there’s an academic review to be completed, on this occasion it’s Thomas Palmer’s Jansenism and England: moral rigorism across the confessions which appeared earlier this year with OUP. That review, for Journal of Religious History is due next week! It’s an excellent book and not entirely without contemporary resonance. In these Brexit obsessed times, it’s salutary to read here of the significant influence of European thought on 17th century Anglian theology and of the extraordinarily dense traffic in erudite books and translations between France and England. ‘Bon gré mal gré, late seventeenth century Anglican divines could admit the reality and importance of the European connection. They recognised the crucial role of the borderless human sciences in making shared sense of a complex world. It’s unfortunate that Palmer’s book will probably not make the Westminster best sellers’ list.

For the historian, the summer months also bring visits to archives, all regrettably brief. A recent excursion to view a private family archive in Kilkenny yielded some fascinating material, including a postcard account of an early twentieth century hurling match in Maynooth College. It refers ominously to ‘great demonstrations of ill-feeling on the side-line’! What serendipitously fitting reading matter for this hurling-haunted season!

Thomas O’Connor holds his doctorate from the Sorbonne. He is professor in history at National University of Ireland, Maynooth and director of the Arts and Humanities Institute there. His most recent publication, edited with Liam Chambers, is Forming Catholic Communities: Irish, Scots and English college networks in Europe, 1568-1918 (Brill, 2018).