How do we think about the sea? How might we properly know it and the role it plays in our lives and the health of the planet? Thinking through such questions stands at the heart of those interdisciplinary spaces we’ve come to know as the “Blue Humanities”, “Oceanic Studies”, or “Environmental Justice”. The answers we come up with will help shape the future of our very existence in the Anthropocene, and the creativity of our responses is surely dependent on breaking across the boundaries of all our disciplines. It was this latter point that prompted the organisation of a one-day interdisciplinary workshop organised by DCU and NUIG on the seas and marine environments which took place on September 21st, 2019. The aim of the workshop was to bring together researchers and those working on the sea both in academia and beyond to discuss the various scientific, economic, historical, local, and cultural pulls at work in our engagement with the seas and oceans. Drawing over fifty participants from academic institutions within Ireland and beyond, as well as attendees from NGOs, industry, and the creative arts, the workshop demonstrated the value of cross-disciplinary conversation on the global marine environment.

We envisaged the day as an opportunity for real dialogue and the exchange of knowledge from as many perspectives as possible. The working mode for the event was thus very much that of a collaborative workshop and it began with panel sessions designed to foster conversation in a smaller group before bringing everyone together later in the day. The first session, “Bridging the Gap Between Research Efforts and the Marine and/orCoastal Community”, saw speakers Dr. Sonya Agnew from UCD and independent scholar Dr. Deirdre Ní Chonghaile draw attention to coastal communities in Ireland. Dr. Agnew spoke about the interdisciplinary Ecostructure project, which hopes to provide tools to aid decision makers create policy around climate change. In her role as a social scientist, Dr. Agnew seeks to understand how communities react to structures designed to enhance the resilience of artificial coastal structures. Complementing this, Dr. Ní Chonghaile’s work emphasised the precarity of island life, evocatively signalled through her paper’s title “Greim an Fhir Bháite”, the grip of the drowned man. Ireland’s islanders, she noted, are faced with narratives of strength, decline, and heroism and in turn tell their own stories of resolve, resilience, and renewal. These papers initiated a lively conversation around a hopeful future for research that acknowledges the reality of coastal communities. Several initiatives, such as Clean Coasts and AquaMaps, were mentioned in relation to ongoing work in these areas.

Parallel to this first session was a panel titled “Otherworldly Oceans”. Ms. Justine Bakker of Rice University began the session by speaking on the representation of the Middle Passage and the phenomenon of whale carcass decomposition (“whale fall”) in the work of U.S. artist Ellen Gallagher. Ms. Bakker explored how Gallagher’s work inverts notions of life and death, terrestriality, and heliocentrism and demonstrates the ocean as an alternative space of multispecies being without losing sight of the historical significance and trauma of the Middle Passage. Her presentation was followed by Dr. Yairen Jerez Columbié of UCD. Challenging the conflation of the terms “magical realism” and the non-canonical “marvelous real” (lo real maravilloso), Dr. Columbié explained how the latter concept can be employed to face up to the challenges of life in a time of anthropogenic climate change. Dr. Columbié expertly showed that one area in which this mode of criticism can fruitfully be employed is that of the coral reef. The panel finished with a presentation by Ms. Rachel Claire Hill of Goldsmiths University in London, who explored how our imaginaries of other planets and of life in watery exoplanetary environments can reshape imaginations of marine environments on our own planet. In the ensuing discussion between the three panelists and the audience, it soon became clear that all three speakers move beyond fixed ontologies and epistemologies in order to unsettle the status quo of theory and criticism; and this in particular when it comes to the multispecies society. Like their parallel conversation partners in the next room over, everyone present felt that the panel had been a great start to a day of knowledge exchange. 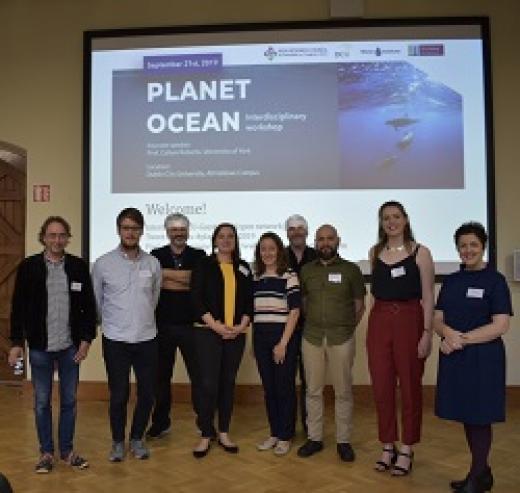 As part of the workshop, an exhibition of garments designed by DCU Water Institute’s Designer-in-Residence, Pamela Heaney was on display throughout the day. Taking the participants through the design process of her collection “Diaphanous Beneath”, Ms. Heaney explained that her work had been inspired by seabed mapping and crab patterns discovered by researchers in DCU. Dresses were made using materials such as neoprene (used mainly for wetsuits) in colours that reflected the sea’s changing appearance and translucence. A sustainable and low-waste philosophy underpinned the collection, which saw the use of cutout patterns and symmetrical design. Heaney’s work demonstrates the creativity that can be unleashed through interdisciplinary dialogue and her garments were a great addition to the day.

A fascinating keynote lecture was delivered by Prof. Callum Roberts of York University (and is available on the Planet Ocean website). In his talk, titled “History Offers New Perspective on the Future of the Ocean”, he began by emphasising the need to look back to the history of the ocean in order to devise new solutions for tackling climate change. Paintings and pictures from the past help us to recognise what the ocean was like before the large-scale mechanisation of the fishing industry. He spoke at length about shifting baselines in relation to the ocean: the idea that each generation has a different conception of what is considered “normal” for our interaction with the ocean (how many fish can be caught, what local tidal movements are like, et cetera). While conservation efforts are noble, a more radical approach is to look at what history can tell us about the ocean’s past and aim to restore what once was. He ended by pointing towards ongoing contemporary work to protect the oceans, such as the 30x30 plan, which aims to designate 30% of the oceans as “highly protected” by 2030. In ensuing discussion, some wondered if we should be optimistic and asked if it is possible to return to previous baselines. The Humanities perspective also offered a suggestion that conservation efforts which take place only in the Global South may reinforce colonial hierarchies.

Another round of panel sessions saw a turn to the romance of the seas and capitalism and the oceans. In “(De-)Romanticising Marine Environments”, UCD’s Dr. Philip de Souza traced pirates from ancient times to the contemporary moment, while Ms. Michelle Dunne of DCU presented her work on Co. Clare’s maritime folk tales. Piracy today, the attendees learned, has a real financial impact as well as the local ramifications of pirates on the seas. Elsewhere, uncovering the role women play in the sea-tales can reveal how sailors treated their own wives. A thought-provoking discussion forced those present to consider how we think about the sea; its potential for danger, romance and adventure. Indeed, these views of the sea can be found in some of the earliest Western texts, with Greek poet, Hesiod, warning of the perils of the sea.

The parallel session focused on the topic “After Capitalism - Marine Environments Reimagined”. Dr. Michael Paye of the University of Warwick drew on a number of The Guardian’s 2011 “oil stories” as well as a novel by Nnedi Okorafor to paint a playful, yet at times terrifying, picture of post-extraction coastal societal configurations along the Atlantic Ocean. His presentation was followed by Dr. Annie Lewandowski of Cornell University, who described her efforts of composing with and alongside whale song, in particular in her projects “Cetus” and the forthcoming “Whale Listening Project”. She also spoke on her collaboration with Katy Payne, one of the contributors to the famous Songs of the Humpback Whale (1970), and on ways in which past ocean engagements could be re-leveraged to chart future paths - specifically when it comes to the climate crisis. Finally, Mr. Tomas Buitendijk of Dublin City University spoke on Nadine Gordimer’s short story “Loot” and the lessons it can teach on hubris and humility in this period of great environmental upheaval. He applied the “lessons from ‘Loot’” to a proposed marine geoengineering project to highlight the dangers of excessive anthropocentrism and to suggest alternatives modes of being in a multispecies society. The ensuing discussion covered much ground, but had a particularly strong focus on tensions between activism, hope, and pessimism in the face of the climate crisis. What narratives are out there, and how can we employ them for the sake of the ocean?

The final session saw a diverse group of researchers come together for a roundtable discussion, “Living and working in and with Marine and Coastal Environments”. Chaired by Prof. Fiona Regan of DCU’s Water Institute, the panel was completed by Elaine Azzopardi (University of York), Roger Pullin (Irish Sea Centre), Hendrick Schubert (Universität Rostock), and Hester Whyte (UCC). Ms. Azzopardi and Dr. Whyte spoke about the interdisciplinary projects they are involved with, PERICLES and Catching a Wave respectively. Prof. Schubert enumerated the difficulties of finding a balance between the interests of marine stakeholders, based on his experiences of ecosystems assessment and development of policy guidelines. Dr. Pullin outlined the vision for the Irish Sea Centre and pointed to the difference in terminology across fields as one major hindrance to interdisciplinary work. What followed these short overviews was a stimulating dialogue on the seas and oceans that ranged from the need to interact with local communities to re-examining how waste is processed and from the effect coastal spaces have on our identities to the need to build well-reasoned, scientific curricula for primary and secondary schools. The discussion highlighted the productive interactions and new perspectives that can come from interdisciplinary work as well as the challenges and obstacles that remain when trying to find a common language to talk about the ocean.

The workshop seemed to gain momentum throughout the day. There was a real sense among participants that both cross-disciplinary dialogue and interdisciplinary project work are of vital importance in research efforts pertaining to the protection of the world’s seas and oceans. From reflections on the day, “Planet Ocean” feels like a burgeoning groundswell. For Humanities scholars in the audience, it became very evident that dialogue with researchers from STEM and the Social Sciences - along with representatives from NGOs and industry - is of vital importance to their own research efforts. Those working in areas such as the Environmental and Blue Humanities were made aware of the ongoing efforts both to preserve and protect the oceans and also exploit it as a resource. This provides valuable context, directly grounded in expertise. Moreover, the Humanities not only provides ways to help scientists understand the oceans but also asks important conceptual questions of ongoing scientific research. The narratives around the sea and the sea-stories that are told in all contexts was a key idea that returned throughout the day. As Humanities scholars, we are well placed to reflect upon, challenge, and analyse those narratives to provide a well-rounded approach to the world’s seas and oceans.

Ellen Howley and Tomas Buitendijk are PhD candidates at DCU’s School of English and co-organisers of the IRC-funded “Planet Ocean” Workshop. Ellen’s thesis is a comparative study of how Irish and Caribbean poets write about the sea. Tomas researches changing representations of the ocean in twenty-first century fiction and film.